About Us » Board Of Directors » M. Scantlebury 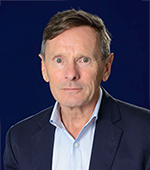 Michael Scantlebury is Steamships Finance Director and Company Secretary. Mr Scantlebury assumed his role on 21st September 2020. Mike first joined Steamships as Finance Director prior to taking up the Managing Director’s role from August 2018 to September 2020.  He joined Steamships from the Swire Group in Hong where he was latterly the Director Financial Planning at Swire Pacific Ltd. Mike is a chartered accountant (Scottish Institute, although he is English, how did that happen?!) and worked in London and Hong Kong with KPMG and PwC respectively. He joined Swire in 1987 and spent time in the finance department at Cathay Pacific Airways and the Trading Division of Swire Pacific. Mike left in 1999 to pursue adventure, and his roles thereafter  include; chief financial adviser to Philippine Airlines, finance director to a start-up airline in Rome and finally Finance Director to a horse racing and breeding operation in England owned by Sheikh Maktoum of Dubai.  Mike returned to the Swire Group in Hong Kong in 2007 and headed the procurement and aircraft trading team at Cathay for eight years and then a head office role at Swire Pacific. Mike's appetite for challenge and opportunity has now brought him to Steamships where he started in June 2016.